Between 200 to 300 volunteer re-enactors from the North West Territory Alliance  descended upon Vicksburg from Saturday, June 24, 2017, to Sunday late afternoon to demonstrate, perform, educate, and live as they were in the Northwest Territory in the lead up to conflict between the King of England and the Patriots.

They kicked off the event with a Fue de Joie on Friday evening at dusk, when all of the re-enactors fired their guns into the air to signal the opening of the two-day event.

A Fue de Joie is a rifle salute fired by soldiers on a ceremonial occasion, each soldier firing in succession along the ranks to make a continuous sound. The Feu de Joie – literally, ‘the firing of joy’ – began with companies discharging their muskets one soldier at a time, going from right to left and back to front, hundreds of years ago. 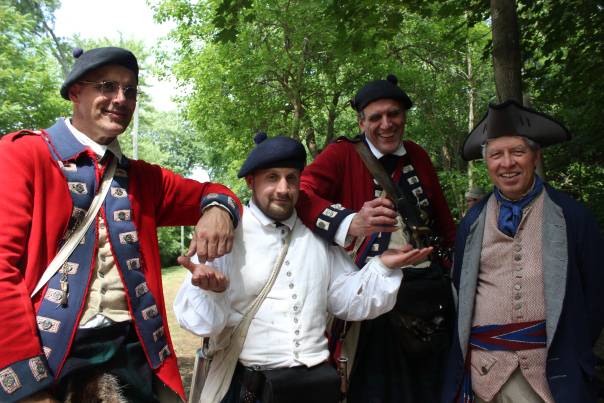 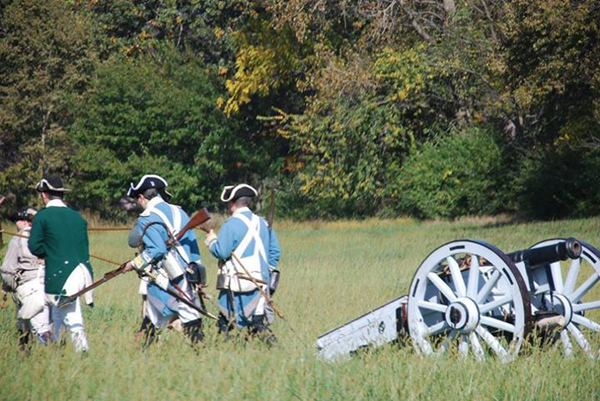 In the morning, activities were underway at the Recreation Park with presentation of the colors, an artillery demonstration, an 18th century fashion show, a tactical performance by the re-enactors, and entertainment by the River Valley Fife & Drum Corp.

There was an reenactment in the Historic Village.

The event on Sunday took take place primarily on the grounds of Prudential Nursery directly across from the Historic Village, which borders Sunset Lake in the village. It has wide open fields and a tree lined beach area on Sunset Lake where the re-enactors pursued the enemy as they hid in the woods or came out into the open fields. The regiments and the camp followers pitched their tents and slept on straw mattresses (for the most part). They enjoyed having the public come and watch, visit, and learn much more about the American Revolution.

There were performances by the music groups in the morning and afternoon. A fashion show was enjoyed, along with two artillery demonstrations. The highlight for the re-enactors was a Seneca Run in the woods behind the camps.