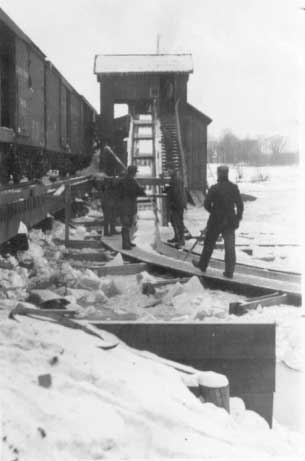 Ice Harvesters work together to pull ice from Sunset Lake

The Grand Trunk Railroad enabled Vicksburg to cash in on one of its natural endowments, an abundance of water. Early trains depended upon ice to refrigerate perishable goods, and Sunset Lake’s proximity to the train tracks made it an ideal source for this commodity. Harvesting the ice became a sizeable local enterprise, undertaken annually before the advent of electric refrigeration.

The Vicksburg Commercial carried a typical account on February 9, 1900. The Canadian and Grand Trunk ice harvest went merrily on till Wednesday afternoon, the rainstorm causing a cessation of work. In the eight days work an average of 50 carloads were shipped daily. The crop is about half  secured. If the weather gets colder work will be resumed, and about 400 car loads more harvested. Beginning in the 1840s, refrigerated cars were used to transport milk and butter. By 1860, refrigerated transport was limited to mostly seafood and dairy products. The refrigerated railroad car was patented by J. B. Sutherland of Detroit, Michigan in 1867. He designed an insulated car with ice bunkers in each end. Air came in on the top, passed through the bunkers, and circulated through the car by gravity, controlled by the use of hanging flaps that created differences in air temperature.

The railroad refrigerator car could be called America’s ‘ice box on wheels.’ Invented some 150 years ago, the car was designed to haul perishable goods such as meat, dairy products, and beer–virtually any foodstuff that required a cool temperature. The car body was well insulated and the interior cooled by ice stored in bunkers at either end of the car. Salt was sometimes placed in the bunkers to accelerate the melting of the ice and lower the temperature of the load. Reefers had a limited time of effective cooling and required re-icing if they traveled greater distances. Railroads had to construct massive icing platforms and ice storage facilities to service the cars at major terminals and other strategic locations.

Highlights of the contribution of Vicksburg’s “Sunset Lake Ice” to the production, preservation and distribution of perishable foods before refrigeration. Presentation length is 24:39. The movie automatically advances, allowing time to read text and view photos. Enjoy the historical journey!