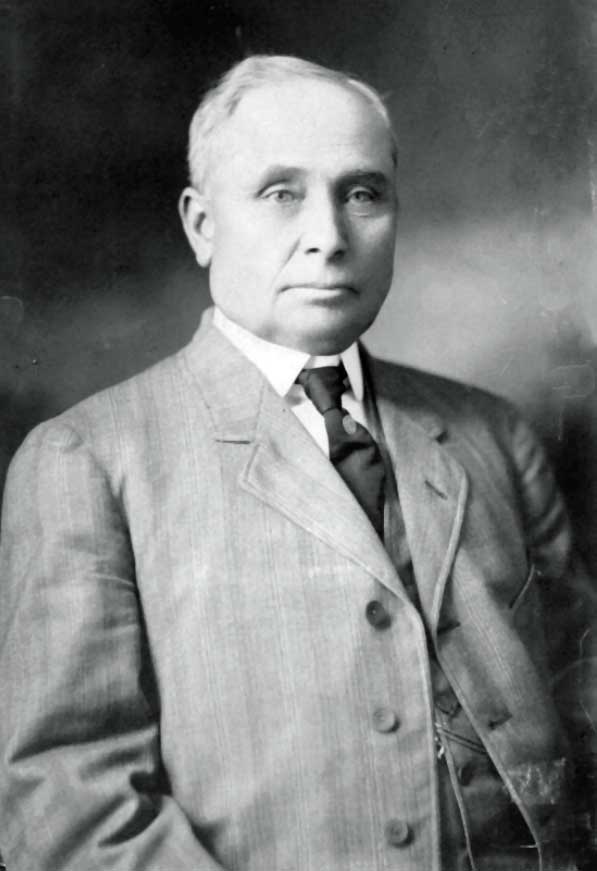 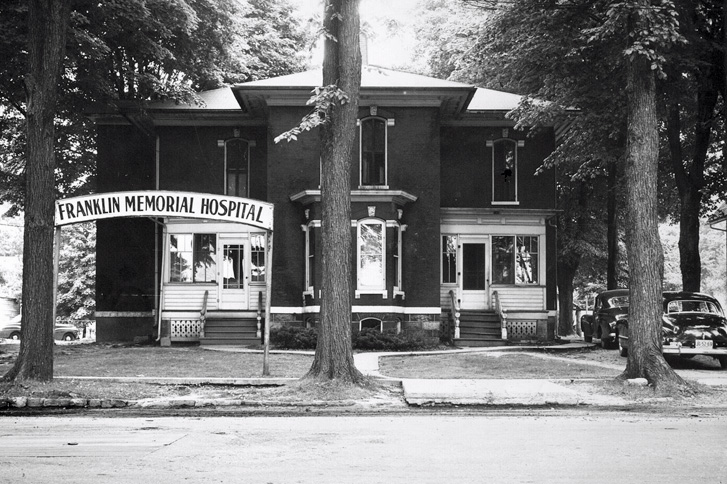 Part of Vicksburg’s charm is the many beautiful old homes stretched along its tree-lined streets. And, when thumbing through old views of Vicksburg’s streets, the Peter Franklin residence on North Main always seems to stand out. Those of us who have lived here all our lives know the history of this stately old building, but “newcomers” to the area since 1969 might not realize that what is now known as Morris Manor was once Franklin Memorial Hospital.

The history of Vicksburg’s own hospital began, and would eventually end, in Kalamazoo. In 1900 the Kalamazoo Hospital Association was formed by local doctors in an old house with 12 beds. The Kalamazoo hospital was reorganized in 1903 and named for Titus Bronson. In 1905, a 46-bed facility was built, providing “state of the art” laboratory and operating facilities.

Vicksburg’s early doctors – Dr. C. H. McKain (pictured), Dr. Frank Coller, Dr. David Squires, Dr. S. C. Van Antwerp and Dr. Z. L. Gilding – routinely performed surgeries either in their offices, or at the patients’ home, as no other options were available. However, when the Kalamazoo hospital opened, they began doing their surgeries there – a better, safer situation for the patient, but a definite hardship for the family. Getting to and from anywhere, especially in winter, could present quite a problem in the days of the horse and buggy.

Vicksburg needed a hospital of its own, and someone decided to do something about it. When Mrs. Ella Singleton died in 1909, it was discovered that she had left a bequest of about $1900 to be kept in trust against the day when enough money could be added to it to build a hospital in Vicksburg. Thus, the Ella Singleton Hospital Association was born.

Another lady was inspired by this gift, Mrs. Peter Franklin. After Mr. Franklin’s death in 1920, Mrs. Franklin, who had no direct heirs, began thinking about the eventual settlement of her own estate. She finally decided the best way to dispose of her large home at 146 North Main Street, her household furnishings and whatever money was left at the time of her death, would be to donate it to the community for use as a hospital. She so stipulated her wishes in her will, made out in 1921. At this point, the hospital association was re-named the Franklin Memorial Hospital Association.

The late Avis Maher, in a 1997 taped interview, shared her childhood memories of the Franklins. Peter Franklin was a partner in a local department store, Franklin and Raynor, which was located at one time where Boers Dress Shop is today. Avis remembered Mrs. Franklin as a retiring, shy woman who hardly ever left her big, brick home on North Main Street, two doors south of where Avis lived with her Aunt Ida. The Franklins had no children, but Avis was always a welcome visitor, and, as little girls will, she became quite a favorite of Mr. Franklin. He often brought her ends of ribbon from the store for her hair. Mrs. Franklin always had a treat for her, and the two spent many hours sitting by the stove in the kitchen.

Much of what we know about the establishment and early operation of the hospital comes from the late Virginia Southworth, RN, long-time Vicksburg Hospital nurse. She did an excellent job of researching the history of the hospital in 1969 for a special edition of the Vicksburg Commercial, published to commemorate the dedication of the new hospital building on Boulevard Street in December of that year. In 1922, Loretta Boughton Franklin died. From Mrs. Southworth’s research we know that a fund-raising effort was immediately begun to raise the money needed to turn the beautiful Franklin home into a working hospital. The community went all out in its efforts – there were benefit suppers, band concerts, and musical programs. Lee Paper Company donated $500.00. The cost of remodeling the house amounted to $5,585.07, and all except $900.00 had been paid in full before the hospital opened.

On October 18, 1924, dedication ceremonies were held, which were attended by many members of the Kalamazoo Academy of Medicine, as well as local residents. Thomas Cannon, Mrs. Franklin’s nephew, was the first President of the Hospital Board, which included John Raynor, of Franklin and Raynor, and Dr. McKain, among others. The original medical staff consisted of local doctors Charles McKain, Frank Coller and his son, Russell Coller. A Miss Hillbert was hired
to take charge of the hospital.

The facility consisted of ten adult beds, and two bassinets for newborn babies. Later a crib for older children was added. There were two wards having three beds each, a two-bed maternity ward, and two private rooms. The kitchen and the staff dining room were in the basement. A cable elevator had been added in a brick shaft on the north side of the building. The large operating room doubled as a delivery room, and new babies were kept there when the room was not in use. When a surgery was scheduled, the babies were simply wheeled out into the hallway.

The first operation was performed October 28, 1924, on Civil War veteran John Bearss. The first baby born was a boy, arriving December 2, 1924. The parents, a Mr. and Mrs. Foster, named the little boy Peter Franklin Foster. John Raynor presented the baby with a beautiful blanket. It was not until April 29, 1925, that the hospital recorded the birth of its first girl – Neva Jane Schmitt,
daughter of Mr. and Mrs. Albert Schmitt.

During the first year of operation, Miss Hillbert was replaced first by Miss Thelma Stillwell, RN, a Bronson Hospital Nursing School graduate; then a Mr. and Mrs. Kester; and then by Miss Eva Kingsley, RN, also a Bronson graduate.

On May 27, 1925, an “Open House/Fruit and Vegetable Shower” was held with visitors contributing their home canned goodies. This was the first of several such events, which netted a total of 2 doz. eggs, 76 quarts of canned fruit and vegetables, 4 glasses of marmalade, 4 pints of pickles, and 9 glasses of jelly. There were also occasional appeals through the Vicksburg Commercial for old linens, cottons, and outing flannel.

At the end of the first year, Miss Kingsley reported that over 100 patients had been cared for, 52 operations had been performed, 8 babies born, and 6 deaths had occurred. All current bills were paid, and there was $22.00 in the hospital checking account.

Mrs. Grace Noble, RN, a graduate of Blodgett Hospital Nursing School in Grand Rapids, was hired in 1928. Her husband, Lester, did the cooking and maintenance. Financial troubles would plague the operation of the facility as the country moved closer and closer to the Great Depression, and the hospital was forced to close in July of 1929.

It reopened in 1931, and operated continuously on the Main Street site until the present facility on North Boulevard was built in 1969. The next time you’re there, notice the photographs hanging in the lobby of Bronson Vicksburg Hospital, which honor the memory of Peter and Loretta Franklin and Mrs. Grace Noble. Plaques also honor both Mrs. Ella Singleton and the countless donors and volunteers who, with dollar bills and jars of pickles, have kept this fine facility going through the years.